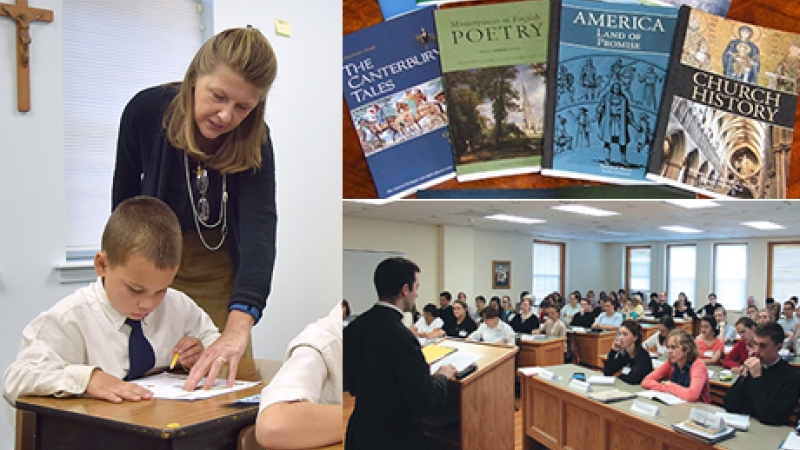 Help us to preserve authentic Catholic Tradition through education: Instaurare omnia in Christo — per educationem

Father Wegner writes this month, seeking generous partners to help provide our teachers with the training they need to really make a difference in the hearts and minds of the next generation.

Letter from the District Superior

As children of God, our goal in life is to find our way to heaven so we can live with Him for eternity. It is the job of every parent, every teacher, and every pastor of souls to help those in their care to find the path to heaven as well. As such, the main goal of Catholic education should be to equip each student with the tools to know Christ, to understand His plan for us, and to do His holy will.

Unfortunately, modern educators and educational theorists have deliberately perverted the proper understanding of the mission of education. In their worldview, there is no God, and no absolute truth—all truth is relative and, since there is no God, we should strive to create heaven on earth.

Often referred to as the Father of Modern American Education, John Dewey was professor of philosophy at Columbia University and its Teachers College. As an educational reformer in the early 20th century, Dewey is credited with building the modern American education system. His theories also influenced the educational systems in Japan, China, the former Soviet Union, as well as my home country, Germany. Dewey was an avowed atheist and secular humanist as well as a co-writer and signatory to the Humanist Manifesto in the 1930s. One of the tenets of that manifesto stated,

Religious humanism considers the complete realization of human personality to be the end of man’s life and seeks its development and fulfillment in the here and now."

Steeped in humanism himself, this “Father of Education” considered it his mission to spread those same ideals to children all over the world. Even most modern Catholic schools—with the acceptance of the Common Core curriculum in many diocesan schools—have not escaped Dewey’s influence.

These goals of modern education are very different from the Catholic goal of knowing God and finding our way to heaven in the next life!

The Society of Saint Pius X rejects this modern philosophy of education. We realize that the mission of the Catholic school is to impart to youth a philosophy of life consistent with the true Faith. Catholic students must be Catholic both in worldview and in heart. They must learn to see as God sees, and love as God loves. They must be concerned, not only with their own lives, or even with their own salvation, but also with the lives and the salvation of others.

The students of our schools will be the priests and sisters, fathers and mothers, leaders of the society of tomorrow. The formation they receive in their tender years will be a deciding factor of whether they will be washed away in the current of our godless society or be able to stand firm and help rebuild that society on the truth of Jesus Christ.

...Read the full letter by downloading the PDF below